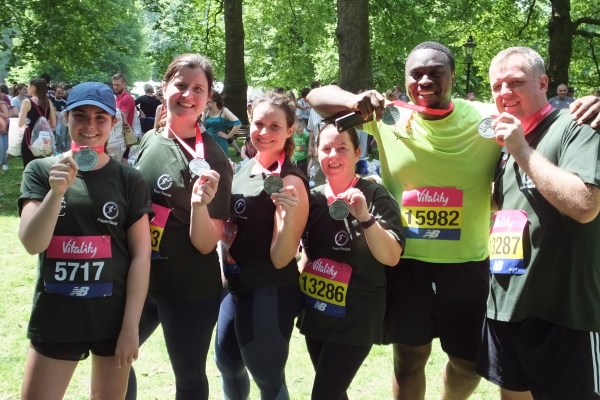 On a sunny Bank Holiday Monday, our team of six runners took to the city streets as part of the Vitality London 10,000 to help raise much-valued funds for The Children’s Literacy Charity. They were in good company, with Olympic sprinter Sir Mo Farah also in the line-up for the race.

Our team was made up of five members of waste management company Paper Round, who have been loyal supporters of The Children’s Literacy Charity over the years, and Michael Momoh, the first child ever to be supported by our charity.

Our runners did us proud, with all six completing the race. Jessica Parrilla from Paper Round had this to say, “On the day I was extremely nervous, particularly the wait to stagger the run, but it was reassuring to have the Paper Round team with me for support. As soon as I started running, I felt relaxed and really enjoyed it. We were all buzzing after the event – it felt good to have raised money for such a good cause. I would definitely do it again!”

For Michael Momoh, the race posed an especial challenge as it was the first time he’d ever attempted to run a distance of 10km. He said, “It was a fantastic day and really great to see people from different backgrounds running to help their respective charities, and motivating each other along the way.”