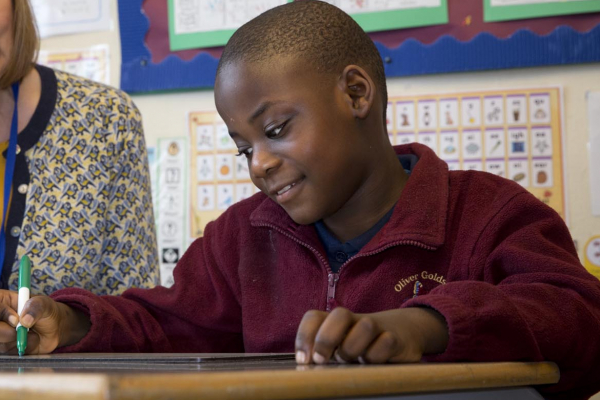 (Image shows a child like Michael being supported in our Literacy Lab).

Exercises designed to build motor skills, multi-sensory activities and texts selected to appeal to his interests have helped to engage Michael in learning. His tutor Andrea explains…

“When Michael first came to the Literacy Lab he was aged seven and in Year 3. He was refusing to do work in class, was easily distracted and would try to negotiate what he wanted to do. In our early sessions, he constantly asked if we could play a game. A clear structure was key to managing behaviour and helping him focus. I wrote the plan for the session on a whiteboard so he could see what we were going to do and tick things off as we did them. He began to settle down to work, knowing that we would play a game at the end of the session.

When reading, Michael would typically add or miss out a sound when blending words, or scramble the sequence. He then found it hard to get this out of his memory. To help him, he used phonics cubes or magnetic letters to make sounds and build words. We also used Stile trays, where children have to answer questions and place tiles in the correct place to make a pattern.

Motor skills and fine motor skills in particular are difficult for Michael. At the start of his time in the Literacy Lab, he had little control of his letter size and finger spaces, pressed too hard with the pencil and wasn’t forming letters correctly. As a first step, we focused on finger strengthening exercises. These included making a fist, fanning fingers, bouncing and catching balls, crumpling paper with one hand and rolling playdough. We then moved on to fine motor skills and pencil control, for example, picking up buttons, using paperclips, threading letters onto pipe cleaners, using scissors, colouring in various-sized circles and following straight and wiggly lines with a pencil.

To encourage writing, we did structured story-led activities. For example, we read a story first then Michael cut out pictures (more fine motor skill practice) and wrote a sentence about each picture. To help boost motivation, we played a darts game where Michael was given one throw of the dart for every full-stop or capital letter used. He loved this.

Linking activities to his interests also helped to engage him. Michael loves animals and has three pets at home. He really enjoyed reading a non-fiction book about the life cycles of animals. Afterwards, he cut out pictures and wrote sentences to describe them. He concentrated hard and got the spellings right. The pictures below indicate just how far Michael came with his writing while in the Literacy Lab!”

Take a look inside one of our Literacy Labs.