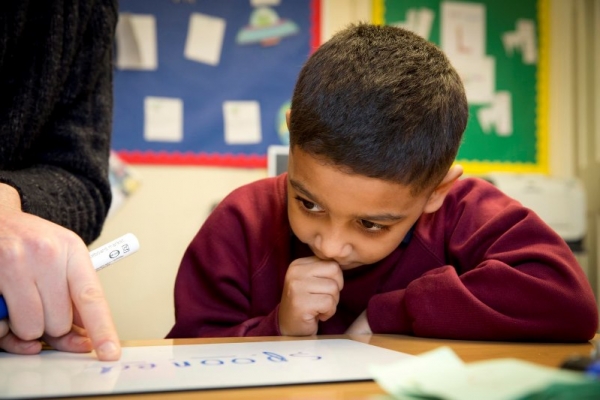 Images show a child like Tamar being supported in one of our Literacy Labs.

Tamar never put his hand up in class. In fact, he barely spoke a word. Although English was his first language, he could not say more than a few words at a time. If you asked him questions about a story, he was, quite literally, speechless. How did language seem to Tamar? A blur of strange noises that left him feeling confused, even scared? Was that why he seemed to shrink in on himself?

Tamar’s teacher got in touch with us in September 2016 when he was age five years old and ten months. An initial reading check put his reading age at four years and four months – 18 months behind age-related expectations. But as the check does not measure beyond this, his reading age was, quite possibly, lower still.

Over the next few months, Tamar worked one-to-one with a tutor in the calm and welcoming environment of our Literacy Lab at his school. His tutor used pictures to draw him in, pointing out details and supplying the language needed to describe what he was seeing. He repeated back sentences modelled by his tutor, trying out unfamiliar vocabulary and tuning in to the cadences of sentence structure. In time, and with the help of picture prompts, he started to respond to simple questions about a story. Who is it about? What are they doing? Where does the story take place? Which part did you like best?

As the weeks went by his understanding, and his confidence, grew. The books he read became thicker, the lines of text stretched longer. He learnt to tease out the stories, to mine for nuggets of information, to plant himself in different characters’ shoes and volunteer his own opinions. Did he like the book? Why? Why not? How might the character in the book be feeling? What would he have done differently in that situation? What might happen next?

His teacher noticed a huge difference. “He’s now willing to have a go with writing, reading and answering questions openly in the classroom,” she said. Where once he would have stared blankly or shyly nodded his head, he now had the words and self-belief to speak up. Tamar had found his voice.

At the end of the summer term, the reading check was done again. At the age of six years and eight months, he had a reading age of six year and ten months. Tamar was no longer falling behind. He was pulling ahead.

The story of this shy young boy speaks volumes about the difference we can make by giving children, the time, space and support they need to grow. We’d love to reach more children, in more places, more often.

Could you make a donation and help more children like Tamar find their voice?

(Image shows a child like Tamar being supported in one of our Literacy Labs).