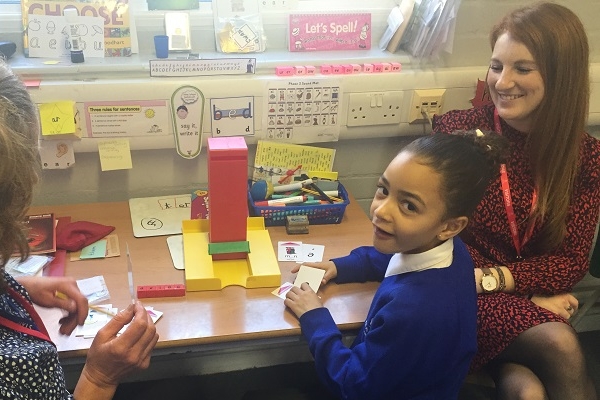 “What do I have on my head?” Corinne lifts her hands and makes them into horn shapes. In the Literacy Lab, 7-year-old Karina, who speaks English as an Additional Language (EAL) and Portuguese at home, is practising the ‘or’ sound. In front of her is a set of words and pictures, all containing ‘or’. Some – like horns – she’s not sure of.  So her tutor Corinne steps in to help with actions and verbal clues.

Today, the pair have been joined by a special guest. Olivia is visiting from our corporate supporter Haggie Partners, a City-based financial communications firm. Like Karina, she also faced challenges with literacy growing up.

Olivia says, “I struggled a lot and received one-to-one tutoring on top of special classes at school. I believe they were the building blocks of where I am now. Working in PR, reading and writing is a big part of my life. The fact that these children are getting the help with their reading and writing so early is great.”

On the other side of the Literacy Lab, Yasir is holding a bright green fly swat. Like Karina, Yasir also speaks English as an Additional Language – his first language is Arabic. This session, he’s taking part in a word game to help practise high frequency words (like ‘with’, ‘for’, ‘too’ and ‘now’). Val reads out sentences containing the words, then he and Val race to swat them on the wall. They too have a special guest joining them – Jo from Haggie.

In recent weeks, Jo has been raising funds to support children like Yasir as part of Haggie’s challenge fundraising team. So far, they’ve staged their own static cyclic challenge, racing an impressive 100 miles ‘From Cornhill to Calais’ against their client, Capiscum Re. They’ve also taken part in the Tour de City cycling challenge as part of City Giving Day on September 26th.  And Haggie Partner Damian Beeley has taken on a head-spinningly high challenge, abseiling down the side of the Cheesegrater.

“Fundraising as a team at Haggie has been fantastic,” says Jo. “It’s wonderful to visit the Literacy Lab and see the results of our support in action, and to meet a couple of the children who benefit from such a vital organisation. It’s clear how dedicated the tutors are to the children’s futures, and how much they want to help them realise how capable they are.”

As a charity, we are extremely grateful to Haggie for their support and enthusiasm. Through their fundraising, we’re able to reach more and more children with life-changing literacy support.

Can you help Haggie reach their target of raising £12,000 for The Children’s Literacy Charity?