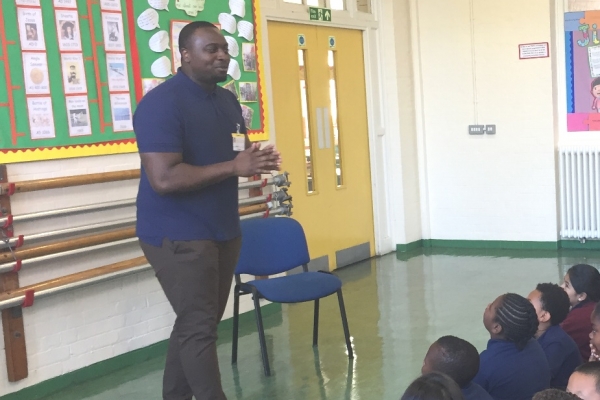 Michael Momoh, the first child to be supported by our charity, is visiting his old school, Oliver Goldsmith Primary School in Camberwell. Looking out across the rows of children sitting cross-legged on the floor where he himself once sat, he poses the question:
“Who’s your favourite superhero?”
A flurry of eager hands goes up – Iron Man, Spiderman, Black Panther. The fourth child hits upon Michael’s own favourite superhero – Batman.
“Let me tell you why he’s my favourite,” says Michael. “There’s a scene in The Dark Knight Rises where Batman is asked, ‘Why do we fall?’ The answer? ‘So we can learn to pick ourselves up’. There will always be struggles in life but with strength and determination you can pick yourself up and get through it.”

As part of the assembly, Michael has been sharing some of the struggles he has had to contend, from the death of his father to dealing with dyslexia. While a student at Oliver Goldsmith, Michael received support from The Children’s Literacy Charity (then called Springboard), developing a love of books and learning thanks to his one-to-one literacy tutors and the school’s team of dedicated staff.

When the children are asked who has ever attended our Oliver Goldsmith Literacy Lab, another flurry of hands goes up. Like Michael, they all know what it’s like to experience challenges in their learning. With the right support and encouragement, and by cultivating an inner-determination, there is every chance they too will go on to succeed.

Indeed, Michael makes for an inspiring role model. In the 25 years that have passed since he left Oliver Goldsmith, he has completed a degree in Digital Arts and Animation at the University of West London, worked as a council officer and now manages his own consultancy, while also studying for an MBA. What’s more, he’s even starred in several plays and films, including a surprising turn as a gorilla in The Legend of Tarzan (he acted out moves which were then rendered in CGI).

After the assembly, Michael sits down to chat to a group of Year 6 pupils who have previously been supported by The Children’s Literacy Charity and are now about to make the big move to secondary school. To help them find their feet, Michael encourages them to pursue their talents, citing his own successes as an athlete (he was his school’s long jump champion five years running) and his love of art. And for the things that don’t come so easily?

“Acting is a brilliant skill to pursue,” he suggests. “During my time at secondary school, I was in Hamlet. The words scared me but I wanted to prove to everyone that I could do it. Memorising lines helped me to train my mind and develop my ability to speak in public. It also helped me understand my emotions.”

There’s one more important entry on Michael’s CV which we have yet to mention. Recently, he became a trustee for The Children’s Literacy Charity. We are truly grateful to have such an insightful and inspirational figure on board, and very much look forward to working with Michael as we develop and grow our work!

Did you know that £15 could provide literacy resources for one child for an entire year? To lend your support, donate here.